Pinball can trace its origins back over many generations, indeed hundreds of years and to the time of Louis XIV in France. The game has come in a variety of incarnations, and remains popular in some quarters even today.

Pinball enjoyed a number of peaks in its popularity. In addition, in the 20th and even into the 21st century, the game of pinball and pinball machines took some unusual twists and turns, many of which are largely unknown today. Indeed, there are eight unusual facts about pinball that are likely to surprise you.

Pinball was Illegal in Many U.S. Cities

Perhaps the most surprising fact many people do not realize about pinball is that the game was illegal in many major cities in the United States for a period of about 30 years. From the 1940s into the 1970s, pinball was outlawed in numerous Americans cities, including New York, Los Angeles, and Chicago. Pinball was banned in these cities because it was regarded as a game of chance, rather than skill. In fact, until 1947, the flipper was not installed on pinball machines, leaving a great deal to chance.

New York Mayor Florio LaGuardia took a particularly harsh position when it came to pinball in his fair city. The Mayor went so far as to make confiscating illegal pinball machines the number one priority for the New York Police Department.

The Mayor ordered raids, quite like what was undertaken in regard to illegal alcohol and speakeasies. Thousands of pinball machines were confiscated by the New York police in this manner.

The mob was highly involved in bootlegging during the era of alcohol prohibition. It is also likely that organized crime figures involved themselves in illegal pinball operations as well. 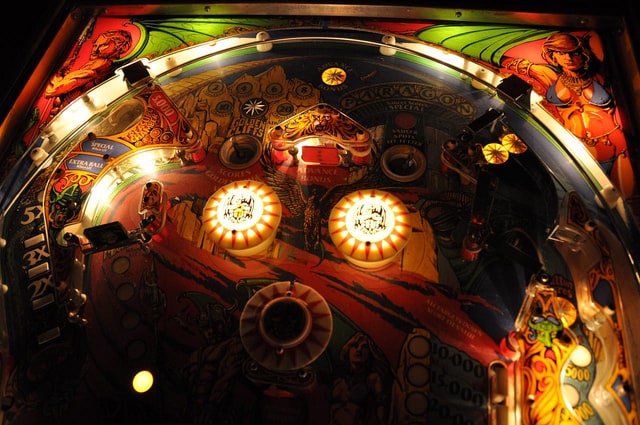 In a number of major U.S. cities, particularly New York, pinball went underground. Pinball machines ended up being tucked away in pornography shops, primarily in Harlem and Greenwich Village. The intense confiscation of pinball machines of the LaGuardia era did die down somewhat. However, the police in the Big Apple continued to conduct raids and confiscate pinball machines in the city into the 1970s.

Because pinball was illegal for so long, its appearance in television, film, and on the stage, including in the 1970s, was used to demonstrate rebellion and youth. For example, The Fonz in the highly popular television sitcom Happy Days regularly can be seen playing pinball. The rock opera Tommy focused on pinball as a sign of rebellion and youth. Even the popular Fox television program The Simpsons has played on the theme of pinball as rebellion. A character in that show once remarked that television has ruined the minds of more young people than had pinball and syphilis combined.

Pinball was finally legalized in New York City in 1976. The key to legalizing the game was convincing the City Council that it was a game of skill, and no chance. A young magazine editor, who was thought to be the best pinball player around, was brought to the City Council to play the game in front of them, as a means of demonstrating the element of skill. In the end, his efforts provided the catalyst that resulted in the City Council voting to legalize pinball. Other communities that had not yet legalized the game, did so in fairly short speed in the aftermath of the decision in New York City.

The Best Selling Pinball Game of All Time

Playboy founder, and longtime publisher, Hugh Hefner was considered a pinball fanatic. (One imagines he probably had the machines around his clubs even when they were classified as unlawful.) Hefner collected pinball machines. In addition, through the years, he worked with pinball manufacturers to produce Playboy themed machines and games, including some that featured his likeness.

Only One Pinball Manufacturer Exists Today

Jessica Kane is a writer for The Pinball Company, the best online source for new, used, and refurbished pinball machines, arcade cabinets, and more!